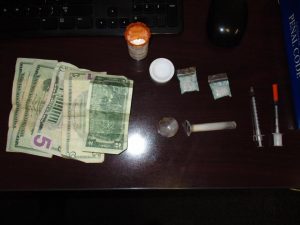 Tuolumne, CA — A Tuolumne man was pulled over on Porto Fino Road because he was driving in reverse at a high rate of speed.

It happened on Saturday at 9:15pm.  The Tuolumne County Sheriff’s Office reports the 1996 Gray Dodge pickup truck was driven by 39-year-old Shawn Janis. The suspect admitted to having methamphetamine in his pocket. Deputies discovered two capped hypodermic needles, a pill bottle containing two bags of meth with a total weight of 3.5 grams that had been packaged for sale, a meth pipe and cash. Janis was booked into county jail for possession and transportation of methamphetamine for sale and possession of drug paraphernalia.

Janis was released from jail after posting $20,000 bail.