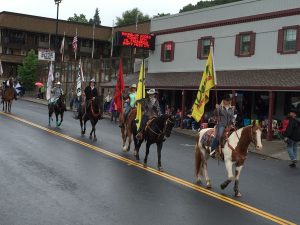 Sonora, CA — Despite sprinkles falling, it did not rain on the enthusiasm of parade goers that tapped their toes to the music from bands marching down South Washington Street in Sonora.

There were over 165 entries registered in this year’s Mother Lode Roundup Parade, which began at Restano Way and ended at Sonora High School. There was a mix of political figures including some county supervisors and city council members, little leaguers, church groups, the Rodeo Queen and her court, and floats. Of course, leading off the parade was the Sheriff’s Posse members on their magnificent horses. This year’s Grand Marshall of the parade Vern Gerdau and Mother of the Year Maggi Wittman both had grins from ear to ear as they waved at the spectators, not letting the soggy weather drown their enthusiasm.

Many are now heading over to to rodeo, which begins at 2 p.m. and then a dance at 8 p.m. both at the Mother Lode Fairgrounds. For a list of all this weekend’s Roundup events, click here.

Click on the photo box in the upper left-hand corner to see several of this year’s entrants.

To view several videos from the parade, click here.