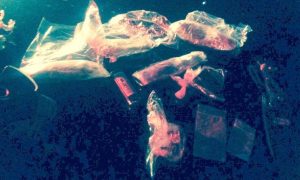 Jamestown, CA — A man and woman are behind bars after a deputy makes a traffic stop, smells pot and discovers drugs.

The deputy pulled over the 2005 Chevrolet truck for hauling a trailer with no license plate and no lights on the pickup’s plate. The stop was made on Nelson Road in Jamestown around 4:30 a.m. Sunday.  The Tuolumne County Sheriff’s deputy smelled marijuana coming from the truck’s cab. Sheriff’s officials report the deputy searched the vehicle and individuals, which netted four baggies of methamphetamine packaged for sale weighing a total of 3.39 grams, four baggies of marijuana packaged for sale, weighing 27.64 grams, a digital scale and methamphetamine smoking pipes.

No drugs were found on the driver, 46-year-old Mark Smith from Hughson, who was only cited for the code violations.  His two passengers’ 45-year-old Shane Mackie and 40-year-old Sharma Stevenson both of Hughson were arrested at the scene. The pair was booked into the Tuolumne County Jail for transportation and possession for sales of methamphetamine.  Stevenson also faces transportation and possession for sales of marijuana charges, while Mackie got an added charge of having a concealed fixed blade knife hidden on him. Both remain in custody on $30,000 bail.