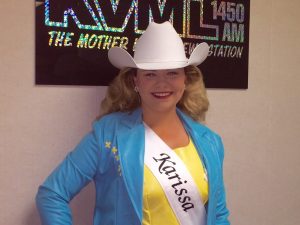 Rogers was Wednesday’s KVML “Newsmaker of the Day”.

In fact, the only category Rogers didn’t win was Horsemanship. That went to first runner-up Samantha Turner.

Rogers is a Junior at Sonora High School where her favorite class is English. Roger’s parents are Chris and Shasta Rogers and she has one younger sister who attends Jamestown Elementary. Rogers also has four horses.

According to Rogers, preparation is the largest lesson learned in running for Mother Lode Round-Up Queen.

“I’m looking forward to this year’s rodeo and I’ve been waiting so long for it,” said Rogers.

As for her future, Rogers would like to go to the University of Montana and obtain a Degree in Broadcast Journalism.

The second runner-up was Annie Torok.

The next big Roundup event is “Band Review” 6 PM Wednesday Night May 4th at Summerville High School, followed by the Calcutta on Thursday May 5th at the Sheriff’s Posse Grounds.