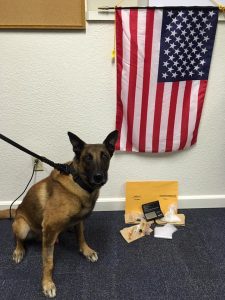 According to Tuolumne County Sheriff’s spokesperson Sgt. Andrea Benson, deputies were seeking James Owsley, 34, and Sarah Hogan, 24 on Sunday afternoon around 1:30 in conjunction with missing court appearances for prior arrests. Noticing a large amount methamphetamine in plain sight, they secured a search warrant of the residence. A narcotics team, with K9 Justice in tow subsequently executed the warrant, turning up four ounces of methamphetamine and 4.3 ounces of heroin, along with packaging and a scale, pertaining to sales of narcotics.