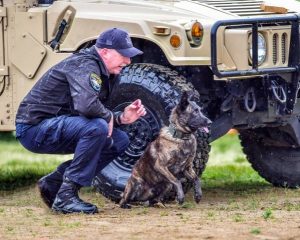 K-9 Thor with handler Sgt. Steve Poortinga and K-9 Kato handled by Chief Todd Fordahl competed in the event, which included both detection and patrol competitions.  Some of the categories included timed searches, obedience and agility test, which challenged the handler and dog to jump a 3-foot bar, tunnel crawl and “A-frame” climb.  Awards ranged from the fastest explosives and narcotics detection, to efficiency in carrying out patrol duties.  The two local teams participated in the two-day event with Chief Fordahl and Kato sniffing out a 4th place finish in the narcotics vehicle search division of the contest bringing home a trophy and bragging rights.