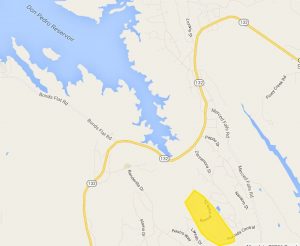 Update at 8:30 p.m.: A P&E crew is working to fix an electrical outage caused after a vehicle hit a power pole in the Lake Don Pedro area just after 4 a.m. 75 customer woke up to no lights this morning and the company has yet to give an estimated time of repair.

A public works crew continues to saw and clear away debris from a huge tree that smashed down closing a section of Banner Street near Shaws Flat Road in Sonora. Police report the road will remain closed for the next couple of hours.

Update at 6:35 p.m.: The CHP reports no injuries in a crash on Racetrack Road around 4:30 a.m. involving a Jeep down an embankment. The roadway was closed for about an hour as a tow crew removed the debris. There were no injuries in the crash. A public works crew has arrived on scene where a tree fell across Banner Road in Sonora, closing the roadway. A tractor and dump truck has been called in to help with removal of the tree, which could take several hours. Additionally, a PG&E crew is at the scene assessing the situation of a power outage in the Lake Don Pedro area impacting 75 customer. No estimated time of repair has been given.

Original post at 6:18 a.m.: The rain has been falling steady overnight and heavy at times creating problems in the Mother Lode.

In Calaveras County, the CHP is on the scene of some flooding near San Andreas on Highway 12 west of Highway 49.  The roadway is open but motorists should use caution and slow down.  A Caltrans crews is heading to the scene to assess the situation.

In Tuolumne County, a Jeep went off the roadway and down a 30-foot embankment on Jamestown Road near Racetrack Road around 4:31 a.m.  CHP officers are on the scene and the road has been shut down as tow crews work to remove the wreckage.  There is no word on injuries or if the wet, slick roads may have played a role.  A large tree has come crashing down blocking both lanes in the 94 block of Banner Drive near Shaws Flat Road in Sonora.  Sonora Police officers are on the scene and a public works crew is heading to the scene.

Additionally, 75 PG&E customers are without power since just after four this morning near Don Pedro Reservoir in the area of Buena Vista Drive and Avenida Central.  A crew is heading to the scene to determine what caused the outage.  The company has not given an estimated time of repair.