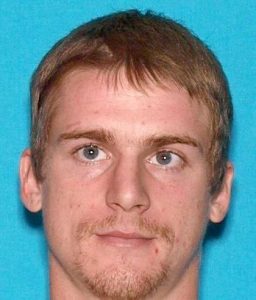 Update on April 11: The Police Department reports that Davis has turned himself into authorities and is cooperating with the investigation into the alleged sexual assault.

Original story published on April 8: Sonora, CA — The Sonora Police Department is seeking help from the public in locating a man wanted in relation to an early morning sexual assault.

The alleged crime occurred at an apartment complex on Greenley Road at 3:30am. The Sonora PD reports that 24-year-old Justin Lee Davis left the complex on foot prior to officers arriving. It is noted that Davis has been in contact with his sister, who has warned him that law enforcement is actively looking for him. Davis is described as being 5’11, 150 lbs., with blond hair and blue eyes. If you see Davis, or know of his whereabouts, call the Sonora PD at 209-532-8141.