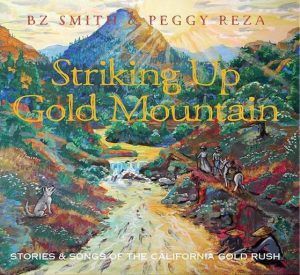 Reza and Smith were Friday’s KVML “Newsmakers of the Day”.

“Striking Up Gold Mountain: Stories and Songs of the California Gold Rush” has received a prestigious Gold Award from the Parents’ Choice Foundation. In response to hearing the news, Smith said, “I felt like one of those people at the Academy Awards when they open up the envelope, hear their name, and scream. That’s how I felt. We were so excited.”

It is one of only three audio projects to receive a Gold Award this year for storytelling.

The two-part CD features a mix of unique stories and historic and original songs. Topics range from how gold first formed in California, to the legend of Joaquin Murrieta, and a family’s journey to California by wagon trail.

The Parents’ Choice Foundation was created in 1978 and is the nation’s oldest non-profit guide to quality children’s media and toys. It weighs aspects such as the educational value, long-term play value, and benefits to a child’s social and emotional growth and well-being.