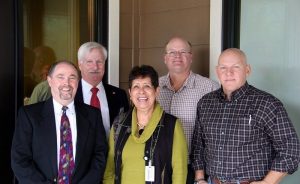 CCWD Board of Directors

San Andreas, CA — In a swift reversal, the Calaveras County Water District Board of Directors will not be increasing rates this coming September.

It was set to be the third and final rate increase that was part of a comprehensive five year plan. The increase was initially set to take effect last September, but it was postponed by a year. Upon further review, it has been canceled completely. The money was going to be spent exclusively on infrastructure improvements. However, some of the notable projects experienced delays, which in turn allowed the district to build up additional reserve revenue. Also, the district was recently successful in attracting millions of dollars in unanticipated grant money, making the rate increase no longer necessary. The Board of Directors took a formal vote at yesterday’s regular session meeting.

CCWD Board Vice President Jeff Davidson says, “This is remarkable in light of the fact that CCWD has endured the housing collapse and water sales are down by more than half a million dollars, due to State-mandated water conservation. Even with those financial challenges, we have not imposed a drought surcharge, which speaks to the fiscally conservative nature of this Board. We should celebrate the elimination of this rate increase, but we should also be cautious moving forward.”