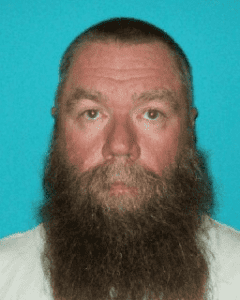 Update 6 p.m.: The CHP has confirmed the arrest of a Golden State Cab company driver for attempted murder after he allegedly ran down a Jamestown man trying to steal a cab early Friday morning.  Investigators report 48-year-old Ronald Udell Paul was taken into custody for deliberately running over 42-year-old Jonathan Giles as he exited the Ford Expedition he had allegedly stolen from the business on Cuesta Court in Sonora. CHP Lt. Scott Clamp stated that Paul was chasing the SUV when Giles turned into the Sonora Mini Mart gas station on Tuolumne Road and Hess Avenue. Lt. Clamp added, “Giles exited the vehicle and began walking across the parking lot. He was struck by the vehicle, a 2010 Ford Crown Victoria, being driven by Paul.”

Initially, Paul was released from the scene of the accident after giving a statement to officers, but was later arrested around 2:30 p.m. Friday after further investigation, according to Lt. Clamp. Giles condition has been upgraded to stable at a Modesto hospital. No charges have been filed against Giles for the alleged theft of the SUV. Lt. Clamp notes that part of the investigation is ongoing and charges may be pending. (Further details on the vehicle theft can be found below.)

This is not Paul’s first run-in with law enforcement. As previously reported in June of 2013, Paul was one of three Gold State Cab workers arrested after a dispute with the owner of a rival taxi service. Paul was taken into custody for allegedly making threats against the owner.

Update at 9:45am: The CHP is investigating an incident that occurred shortly before one o’clock this morning in the area of Hess Avenue.

CHP Sgt. Shawn Snyder reports that an unidentified 42-year-old Jamestown man allegedly stole an SUV from the Golden State Cab company on Cuesta Court in Sonora. Two representatives from the business spotted the theft happening and jumped in their respective cars and took off after the SUV. The vehicle theft suspect drove less than a mile and then exited the vehicle on foot. The first representative from Golden State Cab soon arrived on scene, a 48-year-old man from Sonora, and hit the suspect with his company vehicle. The alleged thief sustained “life-threatening injuries” and was transported to Sonora Regional Medical Center, and later to Doctor’s Medical Center in Modesto.

The CHP reports that no names are being made available at this time as the investigation is still ongoing. Also of note, no charges have been brought against the individual that hit the alleged vehicle thief. We’ll pass along more information as it becomes available.

Original story posted at 7:20am:  Law enforcement officials have been on scene of an investigation near the intersection of Hess Avenue and Tuolumne Road.

The CHP is reporting that a pedestrian was hit at 12:50am. The CHP indicates that the victim was involved in a potential attempted vehicle theft. Details are still preliminary, and we’ll pass along more information when it becomes available. Be prepared for some activity in the area.