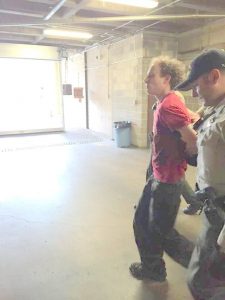 According to Tuolumne County Sheriff’s spokesperson Sgt. Andrea Benson, the call came in at 10:22 a.m. among multiple reports describing shots being fired and a man who was running around the Airport Village Mobile Home Park on North Airport Road in Columbia, bleeding from his arm.

“When deputies arrived, they learned that Geoffrey Wagner, a 28-year-old man who lives in the park, had cuts that he sustained to his arm when he broke a window,” Sgt Benson explains. She adds, “Upon searching his residence, a shotgun and what appeared to be three destructive devices were found, so the Calaveras Sheriff’s Department Special Operations Division inspected the materials and determined them to be incendiary devices — which are also called Molotov Cocktails…designed to cause fires.” (For images relating to Wagner’s arrest, click the slideshow in the upper-left image box.)

Subsequently taken into custody, Wagner was booked on charges of felon in possession of a firearm as well as possession of a destructive device. He is currently in the Tuolumne County Jail, held on a $20,000 bail.