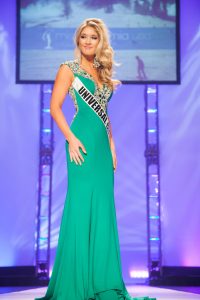 Taylor Gempler was crowned Miss Tuolumne County in August of 2014 and she continues to hold the title today, as there was no pageant last year.

Gempler was Wednesday’s KVML “Newsmaker of the Day”.

After receiving the local title and $500 scholarship, the senior student at Connections Visual and Performing Arts Academy has pursued both pageantry and modeling in southern California, which is where she intends to move to later this year.

Last year, Gempler was crowned Miss Universal City Teen. Gempler was professionally coached by the current Miss United States. That personal coaching helped Gempler run for Miss California last year. Although she did not place, she learned numerous lessons along the way and would like to pursue running for Miss California again.

As Miss Tuolumne County, Gempler has made local appearances and has volunteered her time for causes that are near to her heart.

This Saturday March 5th, Gempler will be collecting blankets as part of the Operations Blankets of Love Blanket Drive for homeless animals and animals in shelters, which includes rescued pets.