Captain Encouragement Goes From Sonora To The Nation 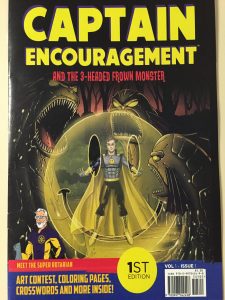 Nicolas Domingo, the mild mannered citizen from Sonora and creator of Captain Encouragement, was Friday’s KVML “Newsmaker of the Day”.

Domingo moved to the Mother Lode one year ago and already had an idea for the character, but it wasn’t until he walked into a local thrift shop and saw a wild pair of goggles, that he realized that he would become the actual amazing Superhero, complete with a cape.

The original idea traces back to Domingo’s observation of people in other cities across the USA, who carried themselves with blank expressions, sour attitudes and almost no smiles.

Once Domingo arrived in the Mother Lode, Domingo noticed that people talk with each other here, care for one another and reach out to neighbors who are in trouble. This helped inspire Domingo even more to create the character and spread the message of encouragement, nationwide.

This Saturday (tomorrow), Mother Lode residents will be able to meet-and-greet Captain Encouragement, along with the rest of his team at the Junction Shopping Center inside of Swirlz, Smoothies and Frozen Yogurt from 10 AM to 2 PM. The comic book will be for sale for just $5 and Captain Encouragement will sign the book for his fans.

We wish Captain Encouragement tremendous success in his future endeavors.