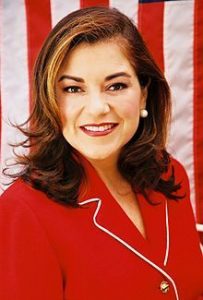 Sanchez was invited by the Calaveras County Democratic Central Committee to talk at a public event at the Murphys Historic Hotel. Prior to the speech, she will be touring the county, including the Butte Fire burn area. Sanchez tells Clarke Broadcasting, “One of the reasons I wanted to go, personally, was to really take a look at the devastation, and to hear the stories about what has come, and what is still needed. I sit on the Homeland Security Committee so I have deep roots into the Department of Homeland Security, which is where FEMA sits. We’ve seen issues before with people not being able to get loans, and issues with red tape. So, I don’t know what some of the issues will be until I go and talk with some of the people that have been trying to rebuild their lives.”

During our interview she added that her parents were immigrants that raised seven children, and all were educated. She has the only parents in history to have two daughters in the U.S. Congress. Asked about the 2016 Presidential race, Sanchez says she endorsed Hillary Clinton in 2008, but has not had time to speak with her yet this time around, so has not made any formal endorsement.

Congresswoman Sanchez says tonight’s speech in Calaveras County will touch on both national security and financial security. The central committee notes that she is also anticipated to address education, the economy, Veterans matters, healthcare and immigration.

Tonight’s reception will run from 6-8pm at the Murphys Historic Hotel. It is open to the public. Other leading candidates in the U.S. Senate race include Democratic Attorney General Kamala Harris and former chairs of the California Republican Party Tom Del Beccaro and Duf Sundheim.