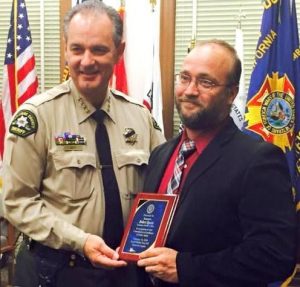 Sonora, CA — It is a big week for law enforcement award announcements with several being honored for their work.

The Tuolumne County Sheriff’s Office announced Wednesday that Detective Robert Speers has been named Deputy of the Year by American Legion Post 58. Lauding Detective Speers for his work, attitude and concern for the community, the department also recognized his investigative efforts as lead detective for a series of weapons-related burglaries and thefts that enabled several arrests and the recovery of over 60 stolen firearms. He was also credited for helping track a missing person case in Columbia that led to the subsequent arrest of her husband for homicide.