Mural Project In The Works For Downtown Jamestown 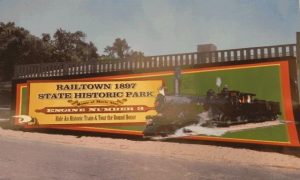 A mural project is in the works in downtown Jamestown that is designed to promote the walk to Railtown 1897 State Park and promote Tuolumne County’s film history.

Jim O’Neil, Board Member with the Promotions Club of Jamestown, was Thursday’s KVML “Newsmaker of the Day”.

In 2014, Tuolumne County secured an estimated $910,000 for sidewalk improvements in Jamestown, and the Promotions Club of Jamestown raised money to turn portions into a walkway that now promotes the rich film history of the region.

Medallions, similar to the Hollywood Walk of Fame, were placed along a stretch of sidewalk between Rocca Park and Railtown 1897.

“We’ve always had this vision of linking Railtown and downtown Jamestown together,” says O’Neil. “Our vision is to enhance our culture and history, and do it in a way that’s pleasing to the public and drive more visitors to Jamestown.”

The medallions showcase films shot in Tuolumne County, and are sponsored by individuals or organizations. There are 30 medallions and that will eventually increased to around 90. Notably, Railtown 1897 has been featured in several popular films and TV shows, ranging from Pale Rider to Back To The Future III.

In addition, there will be a mural painted at the corner of Main Street and Seco Street to promote Jamestown.

The cost of the mural will range from $35,000 to $40,000. This Summer there will be fund raiser for the Jamestown Mural. There was a fundraising event scheduled at the Sonora Opera Hall on Saturday February 27th, but that has been delayed until this Summer. The Black Irish Band featuring Dave Rainwater was scheduled to perform. Silent auction, hor d’oeures with beer and wine for sale. Information will be forthcoming in a few months.

Over the years, it has been noted by many that tourists often stop in downtown Jamestown, but not Railtown, or vice versa. This project is a way to promote the idea of walking back and forth to both tourist destinations. The Walk Of Fame begins in Rocca Park, travels to Seco Street, to 9th Avenue, and ends at 5th Avenue (Railtown 1897).