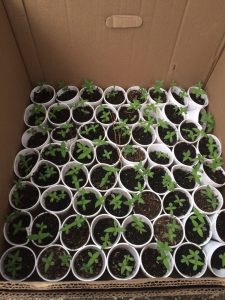 Jamestown, CA — A deputy discovers a flatbed full of pot plants and more hidden in nearby bushes along Jamestown Road.

A citizen tipped off Tuolumne County Sheriff’s officials after spotting a broken down Chevy pickup on the side of the road north of the Mother Lode Gun Club around 6:45 a.m. Wednesday.  The caller became suspicious when he saw two men in the bushes near the truck.

Once on scene, a deputy questioned four men found with the truck. A search of the bushes and the trucks flatbed netted several hundred small marijuana weeds inside foam cups ready for planting.  Deputies determined that the men were trying to hide the plants in the bushes to avoid suspicion.

All four men from Modesto face conspiracy to transport and cultivate marijuana charges. They are:

Rios faces additional charges as deputies found methamphetamine and marijuana seeds on him. Their bail is set at $40,000.