Students Helping Students Is Being Rewarded 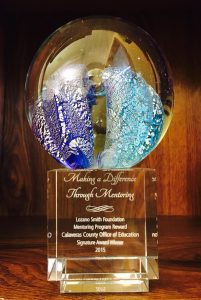 The Calaveras County Office of Education (CCOE), along with five other FNL mentoring programs statewide, won the 2015 Lozano Smith Foundation Mentoring Program Award.  The foundation is a California education and public agency law firm.  CCOE Youth Development Director Kathryn Eustis had this reaction, “We we’re so honored because of the large number of nominations.  Also because this is the first year for this award and it’s statewide.”

The award includes a $500 donation to the program and the crystal trophy that can be viewed in the upper left-hand image box.  The program unites 60 students, which split into 30 paired from Bret Harte High School to Mark Twain and Avery middle schools and Calaveras High School with Toyon students.  The seventh and eighth graders team up with tenth and twelfth graders who mentor them for about 25 weeks during the school year from Sept. to March.  In handing down the award, the foundation applauded Calaveras’ program for having an established evaluation program, which does a good job of measuring its progress.  Eustis says another key element that made it stand out, “Our program is so clearly youth led.  The high school students create the programing and lead the program.  That kind of youth and leadership skills development is a real hallmark of young people’s success in the future.”

This is the 9th year of the program and Eustis acknowledges that it is a huge feather in the students cap, noting, “It has evolved to really represent what the students in the program want.  For our students it is a pat on the back for what they have created and what they think the youth mentoring program should be for our county.”

The foundation provided this list of other award recipients: