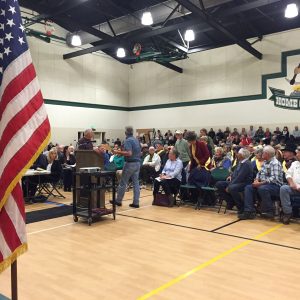 Columbia, CA – Hundreds packed the Columbia Elementary School Gymnasium to make sure their voices were heard regarding the proposed Dollar General store.

Nearly 30 people in the crowd wore yellow sashes declaring “Keep Columbia Historic” making it very evident their opposition to the proposed nearly 9,100 sq. ft. retail store to be built along Parrotts Ferry Road in Columbia. As reported in December, the Tuolumne County Planning Commission voted 5 to 2 against issuing a conditional use permit and site permit for the project. A decision the retailer appealed to the Tuolumne County Board of Supervisors prompted Tuesday’s special meeting. Four spoke in favor of the store, including the owner of the property, another Columbia business owner and Dollar General’s Representative from Cross Development, Joe Dell, who using a projector showed an updated blueprint for the store stating community suggestions had been incorporated into the new design. “We were suggested to add the iron door look, add red brick, and add awnings to make it look like it belonged in the state park. Our intent was never to make the building look like it belonged in the state park, but to actually make it fit within the design guidelines as best we could for Columbia. We feel we have.”

Then it was the oppositions turn. More than 60 people stepped up to the microphone detailing concerns ranging from traffic, safety for nearby school children, and the impact on existing businesses.  However, the main concern centered on the store not fitting in with the town’s historic look. Sharon Marovich with the Tuolumne Heritage Committee told the supervisors, “As you consider Dollar General’s appeal, please keep in mind that the gateway to the park [Columbia State Historic Park] deserves to be protected from garish, modern and inappropriate building and sign.” She noted, “Please pay no attention to the siren song of the potential tax dollars trotted out by developers with poorly planned projects. Columbia’s ambiance and history are priceless. She is the gem of the southern mines and not a cash register for a Tennessee company.” Columbia resident Ken Velenta had no trouble speaking his mind as he turned to the developers stating, “Look around you. We don’t want your store here.” With that, the crowd erupted in cheering and clapping.

The developer, in a last ditch effort, offered to cut down on the size of the building, which brought plenty of jeers from the crowd. After nearly four hours of discussion, it did not take the board long to make its decision, with District 1 Supervisor Sherri Brennan summing it up saying, “Columbia State Park is…as significant to California history as Yosemite National Park is to natural resources. I heard someone mention putting a Walmart in Yosemite. I don’t think any of us would really ever dream of that.” Brennan went on to say, “I have not been convinced that this project meets the design review for Columbia… I have not been convinced in a way that I would overturn the decision that the planning commission made.”

The final vote was 3-0 with Supervisors Randy Hanvelt,  Evan Royce and Sherri Brennan all opposed to the project. Supervisor Karl Rodefer, who represents District 5, which includes Columbia and District 4 Supervisor John Gray were not at the meeting. As previously reported, both had recused themselves due to conflicts of interest.