Mother Lode Setting Up For A ‘Super’ Sunday 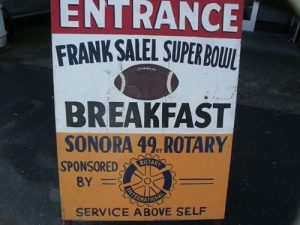 Sonora, CA – While tourism and traffic impacts in the City by the Bay are part of the hoopla ahead of Sunday’s Super Bowl 50, Mother Lode hosts are quietly making their own party plans for fans.

For the 28th year in a row, organizers of the Annual Frank Salel Super Bowl Breakfast aim to get the Sunday game day off to a hearty start with made-to-order three-egg omelets and all the fixings. “It is Tuolumne County’s social event for Super Bowl weekend,” explains Scott Barry, chair of the pre-game gridiron theme shindig, hosted by the Sonora 49er Rotary Club from 7 to 11:30 a.m. in the John Muir Building.

Whether you are pulling for the Denver Broncos, the Carolina Panthers, or neither, Barry says with a grin, “It is a time to socialize and get some football fever before the game.” Advance tickets, available through any 49er Rotary member, are $8 for adults and $6 for children 12 and under. Admission is a dollar more at the door and raffle tickets are additionally available for a number of planned drawings. In addition to elevating excitement ahead of the match up, the event will also raise funds for Sonora High School scholarships and other programs.

Ahead of Sunday’s kick-off  at 3:30 p.m., Pacific Time, the Friends of the Calaveras County Fair invite Super Bowl fans to gather, beginning at 1 for its second annual viewing party at the Frogtown Fairgrounds’ Ranch House. Admission is free and open to the public, according to Ranch House Foreman Robert Moncada. The setup includes a 60-inch viewing screen among other monitors and full sound system; perfect for watching the game and ever-popular Super Bowl commercials spectacle that will include the Animal Planet Puppy Bowl. This year’s $5 million price tag per 30-second spot has already ensured one event-related record-breaker for the books.

“It is just a way of giving a tiny little bit back to the community that helps us out so much,” Moncada states. He points out, “That is why we are not charging anything for this — this isn’t to make money – hopefully, we will just break even and have a good time watching the Super Bowl.” Nominally priced to help cover the costs, beer and hot dogs will be respectively available for $3 and $5 apiece.

Last-minute on-the-fencers still pondering plans to attend the Big Game live should brace for beyond-sticker-shock prices, according to travel industry experts. Secondary market prices for game tickets are now trending over $3,000 apiece, not including parking, which at Levi’s Stadium begins at $68. Hotel prices in the Santa Clara/San Francisco area are ranging from just over $200 to nearly $600 per night for two-star hotel accommodations.

No doubt, many locals who remain that way this weekend will host or attend private Super Bowl soirees. For those who consider their Super Bowl Sunday snacks and libations at the top of the experience, the Calaveras Winegrape Alliance shares some inspired pairings designed to encourage local wine fans to raise a glass. Among the group’s recommendations: pour a light, versatile Grenache to counter-balance those cheesy, meaty sliders; a mellow Barbera for tomato sauce-based pizzas; and a peppery, full-bodied Syrah to complement that big pot of game-day chili. To Mother Lode fans who plan to join the estimated 118 million plus viewers expected to tune in for this year’s championship — cheers!