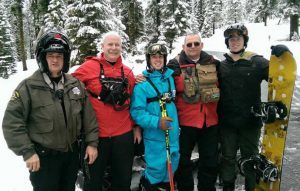 Pinecrest, CA — A search and rescue effort over the weekend produced a happy ending.

Two teens from the Bay Area were rescued by members of the Tuolumne County Sheriff’s Office Search and Rescue Team. The two boys, identified by the Sheriff’s Office as “Brett and Rex,” had been skiing at Dodge Ridge and found themselves out of bounds. One of the teens called 911 and was given step by step instructions by Deputy Rob Lyons how to get back to a nearby road, while volunteers were plotting coordinates on the map for their rescue. The boys were able to find safety, and were quickly met by search and rescue officials.

The Sheriff’s Office notes that thankfully they had a phone and were able to call for help. Officials say its also important to always carry food, maps, proper gear, and water in case you find yourself lost in unknown territory.