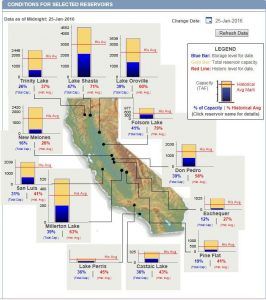 Sacramento, CA – California water officials report the snowfall to date is the most the state has seen in five years.

The state’s Department of Water Resources (DWR) reports the recent winter storms have the snowpack faring better than any January since 2011 with the water content of the Sierra Nevada currently at 115 percent of its historical average.  The northern Sierra sits at 127 percent, the central Sierra is 118 percent, and the southern Sierra is 97 percent.  DWR spokesperson Doug Carlson says a year ago to date it was only at 20 percent of normal and needs to reach 150 percent to help refill the state’s critically low reservoirs.  He shares, “Now we are hoping to see that number to continue to build, and by April 1st we hopefully will be well above 100 percent of normal on that date.  Normal is typically 28 inches of snow water content — 150 percent of that would be 42 inches, so that is what we’re hoping to see.”

Tuesday’s electronic readings of the Sierra Nevada snowpack show that the average statewide snow water content is at 18.7 inches.  Carlson notes the state’s reservoirs are really hurting.  He indicates, “The New Melones Reservoir is now at only 16 percent of capacity and only 26 percent of the storage you would typically find on Jan. 26.  So, it would take a lot of rainfall consistently coming down without stopping or just a few breaks to bring it up to the historical average. So, we’re seeing increases but New Melones has got a very long way to go.” Currently, Don Pedro Reservoir is at 39 percent total capacity and 58 percent historical average for the date. Lake Tulloch is at 86 percent and 103 percent respectively.

DWR officials will conduct the second manual snow pack reading on Feb. 2 at the Phillips Station off HWY 50, 90 miles east of Sacramento.