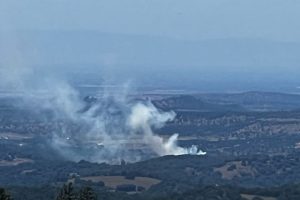 Update at 2:20 P.m.: Firefighters have contained a vegetation fire in Jamestown that broke out around 1:45 p.m. CAL Fire Dispatch tells Clarke Broadcasting that the flames ignited in some grass in the 10100 block of Karlee Lane, off Jacksonville Road, and east of Highway 108. The blaze was burning near a fence. Initially, it threatened several structures in the area, but crews were able to contain the fire in about 10 minutes at an acre in size. All Columbia aircraft have been called off the scene. Ground crews will remain on the scene mopping up for the next couple of hours. What sparked the fire is under investigation.

A special thanks to Dave Stayer and Lori Nevatt for sending in photos.

Original post at 1:55 p.m.: Jamestown, CA — Columbia aircraft and ground crews are battling a vegetation fire in the Jamestown area of Tuolumne County. CAL Fire reports that the flames broke out in some grass in the 10100 block of Karlee Lane, off Jacksonville Road, and east of Highway 108. The fire is a half-acre in size and is burning near a fence. There is one structure threatened. An update will be provided as soon as new information comes into the newsroom.