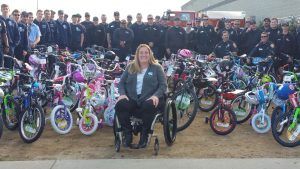 It was part of the 4th annual Sue Arrouzet Toy Drive held Saturday at the Sonora Walmart. Firefighters also bought nearly 75 bicycles for area children. The TCFD Explorers also collected donations at the event and used those to purchase additional gifts. The toys and bikes will be distributed via ATCAA for kids in Tuolumne County and the Resource Connection for children in Calaveras County.

Fire Captain Jed Skrobecky served as the toy drive coordinator and reports that representatives from each CAL Fire battalion helped to raise money within the two counties.

The event is named in honor of Fire Captain Sue Arrouzet who was severely injured while fighting a structure fire in Copperopolis in 2011. Arrouzet was on hand for Saturday’s event.