A Trend In The Cost Of Thanksgiving Dinner 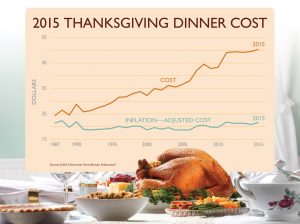 The AFBF survey shopping list includes turkey, bread stuffing, sweet potatoes, rolls with butter, peas, cranberries, a relish tray of carrots and celery, pumpkin pie with whipped cream, and beverages of coffee and milk, all in quantities sufficient to serve a family of 10 with plenty of leftovers. AFBF’s 138 volunteer shoppers checked prices at grocery stores in 32 states.

The Farm Bureau reports the recent stable average price tracks closely with the government’s Consumer Price Index (CPI) for food eaten at home. For October 2015, the most recent month available, the food at home CPI posted a 0.7 percent increase compared to a year ago.

This year John Anderson, AFBF’s deputy chief economist, says, “There were some production disruptions earlier this year due to the highly pathogenic Avian influenza outbreak in the Midwest. Turkey production is down this year but not dramatically.” He also notes retailers are featuring turkeys aggressively for the holiday, “According to USDA retail price reports, featured prices fell sharply just last week and were actually lower than last year.”