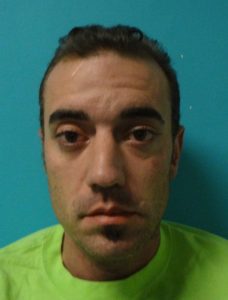 According to Sonora Police Chief Mark Stinson, the incident happened earlier this week in the 200 block of Stockton Road. The arrest came shortly after police received a phone tip from an anonymous caller, who contacted police to report that a white male adult with numerous tattoos and wearing a gray tank top t-shirt was breaking into a trailer.

Providing further details, Chief Stinson recounts, “When officers arrived, they located the trailer — it had been burglarized. They also located a subject matching the description in a nearby creek bed…officers contacted this individual and identified him as Chad Hilton, 28, of Mi Wuk…on felony probation for identity theft.”

Stinson additionally recalls, “During a search of Hilton’s person, a credit card which was not in his name was located. Also on his person was property belonging to another victim of a vehicle burglary in the same area.”

Hilton was taken into custody without incident and booked into the Tuolumne County Jail for felony burglary and misdemeanor possession of stolen property. Responding to a query by Clarke Broadcasting, asking why the alleged burglar was back out and apparently re-offending so soon, Stinson replied with this rueful remark: “With Prop 47 today, crime actually pays.”