A Scare For Curtis Creek Students 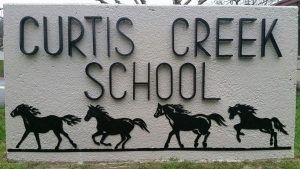 Sonora, CA — A large tree came crashing down as kids were out on the playground at Curtis Creek Elementary but luckily no students or staff were struck by the tree.

On Monday, as first, second and third graders were on recess, the top of a huge ash tree fell onto a corner of the playground. The Curtis Creek School District subsequently emailed and sent letters home to parents regarding the incident, informing them that “no students were seriously injured,” but noted that several students suffered minor scratches.

The district office reports that, after the incident, the school allowed students if they had any concerns to call their parents.  The school has taped off the section of the playground where the tree top fell until crews are able to remove it. In her letter, Superintendent/Principal Sharon Johnson promised to have the rest of the trees on campus inspected. When contacted by Clarke Broadcasting for comment Johnson was not available and did not return the call.