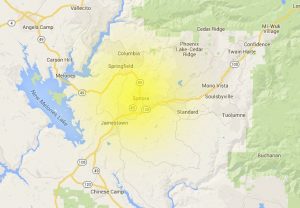 Update: The service was restored by around 3:45pm on Wednesday.

Update at 3:35m: A  Comcast representative tells Clarke Broadcasting that a fire at one of its facilites in Fresno is to blame for the huge outage affecting thousands of phone, internet and TV customers. The impacted area stretches across Northern and Central California, including Tuolumne County (See areas listed below). The customer service representative reports electricians are on the scene working to replace a breaker but there is no estimated time of repair.  The fire broke out around 9:20 a.m.

Original Post at 3:14Pm: Sonora, CA — An outage map shows service is down for most of central California, including areas of the Mother Lode.

Some Comcast customers in Tuolumne County are without service this afternoon. The company’s website shows outages in Columbia, Sonora, East Sonora, Standard and Jamestown. There is no word on what has caused the outage, but the map shows the outage stretching all the way from San Francisco to Sacramento and down to the Visalia area.

We have placed a call into the company but have not heard back from representative as of yet. We will update you as soon as new information comes into the newsroom.