Angels Council To Weigh In On ‘Wagon Trail’ 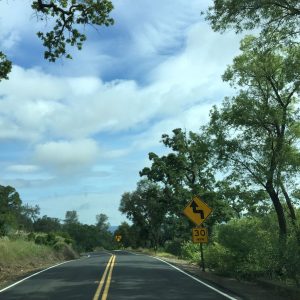 The lead regular agenda item on the council’s meeting schedule is for the council to receive a report on the Wagon Trail Realignment Project. On the books for a number of years, it seeks to improve a picturesque stretch of Highway 4 in Angels Camp below Highway 49 with notable curves that can be perilous for inattentive motorists and during inclement weather.

According to David Hanham, the city’s director of planning and building, it is the region’s number one project to complete. Although led by Calaveras County and the Calaveras Council of Governments (COG) in partnership with Caltrans, the agencies seek the city’s preference and continued “buy-in” as part of the project’s approval and environmental documentation phase criteria.

“From the city’s perspective it’s a great project, because it gets [people] to Angels a little bit faster, a little safer,” Hanham states.

The project faces at least another couple of years before construction might begin on a segment of the roadway, after specifications, engineering and right-of-way processes finish rolling out.

Whittling potential alternatives down from well over two dozen while working in earnest with property owners for the past two years, Hanham says that the current alternatives on the table represent “a good effort,” working with local property owners.

The environmental report narrowed the construction alternatives to two; it considers a “no project” option as well. Alternative 2, estimated at $76 million, which has fewer environmental impacts and can be more easily done in smaller segments has already been chosen by COG and the county as their preference over Alternative 1, which carries an estimated price tag of $92 million.

The meeting, which will be held at Angels House House (1404 Vallecito Road) will open to the public at 6 p.m. following a closed session at 4:30.