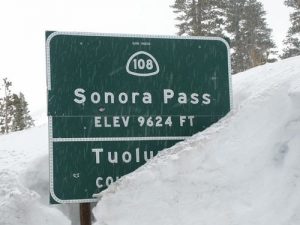 Sonora, CA — Highway 108 Sonora Pass is the first of the area mountain passes to officially close for the season.

Caltrans spokesperson Rick Estrada says another eight inches of snow fell at 6,000 ft. over the weekend, and there is at least three ft. of snow at the top of the pass. Caltrans has not yet made a decision about the fate of Highway 4 Ebbetts Pass, and the same goes for Yosemite National Park and Highway 120 Tioga Pass.