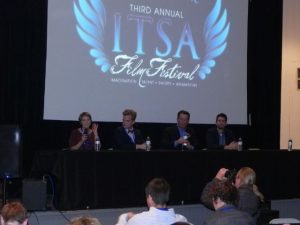 David Wilkinson, co-founder of the ITSA Film Festival, was Friday’s KVML “Newsmaker of the Day”.

The sixth annual ITSA Film Festival begins tonight at 6 pm at the historic Opera Hall. There will be films through 10 pm. Film makers will be on hand for brief Q&A sessions.

On Saturday, more films will be shown throughout the day beginning at 10 am. A feature documentary workshop will take place at 2:15 for the film “7 Days in Syria” by Producer/Director Robert Rippberger who will be there. This premiere documentary is being supported, backed and pushed by actress Angelina Jolie Pitt.

2nd Saturday Arts Night will also be taking place in downtown Sonora and Wilkinson is inviting participants to stop by the Opera Hall for this completely free event. Films will be shown through 10 pm Saturday night.

Finally on Sunday, more films shorts will be shown starting at 10 AM and the Festival concludes with an Awards Ceremony on Sunday evening.

A total of 106 short films will be shown.

The ITSA Film Festival has the backing of several local sponsors, the City of Sonora and the TCEDA.

According to Wilkinson, this is a perfect time of year for Sonora to play host to numerous people who can make an economic difference perhaps by eventually scouting film locations throughout both Sonora and Tuolumne County.

“It’s purposefully held at the very beginning of November, just before the snow and the Holiday season,” said Wilkinson. “We used to have the Wild West Film Fest here and the ITSA Film Festival will help bring film makers and tourists come back to the area. The Festival promotes what the area has to offer, brings in large names and showcases our creative and artistic students at Connections Visual and Performing Arts Academy.”

Complete information and a full schedule, is at www.itsafilmfestival.com