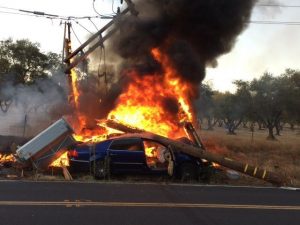 Update Sunday at 7:30am: A special thank you to our community partners Ron Beck and Tom McKee for emailing these photos.

Update at 2:05 pm:  Welcome news, the CHP has change the injury status from major to minor for those involved in the crash.

Update at 12:45pm: The CHP reports Highway 26 will remained closed for another two hours and then open to one-way traffic control until 6 p.m. when they hope to have the roadway completely reopened to traffic.

PG& E has updated its estimated time of repair to 6 p.m. for the remaining 45 customers without electricity due to the vehicle hitting the pole and bringing down lines. At one point, more than 4,000 customers in the dark. Most of those still without lights have been so since 7:46 a.m. when the accident happened.

Update at 12:15pm: The CHP reports major injuries involved in the crash. The highway remains close from South Burson to Jenny Lind roads as tow crews are working to remove the wreckage. PG& E also remains on the scene trying to repair a power pole hit in the crash and restore power to the remaining 45 customers without electricity since 7:46 this morning.

Update at 11:45am: PG&E has restored most of the power to the more than 4,000 customers who have been without electricity for several hours this morning. The company reports 137 remain without power due to a vehicle crashing into a pole causing the lines to come down. The estimated time of repair is 12:30 p.m.

For unknown reasons, the vehicle went off Highway 26 at 7:46 a.m. hitting the pole, then bursting into flames.  The highway is closed from South Burson to Jenny Lind roads with officers directing traffic. There remains no word on injuries.

Update at 10:05am: After restoring electricity to more than 500 of the nearly 2,100 PG&E customers without electricity.  PG&E reports an additional outage that is now impacting 4062 customers in the area.  The estimated time of repair is 11:30 a.m.

The initial power outage was caused by a vehicle going off Highway 26 by the Olive Branch Drive intersection in the Valley Springs area and sheering a power pole bringing down the lines at 7:46 a.m. A section of the highway from South Burson to Jenny Lind roads are still closed to traffic.

Update at 9:10am: The CHP reports Highway 26 is closed between South Burson and Jenny Lind roads. Officers are directing traffic at those closure points. PG&E is now on the scene trying to repair the power lines that have caused the outage of electricity for more than 2,100 customers in the area. The estimated time of repair remain 9:45am. There are still no details on any injuries as a result of the crash.

Update at 8:45pm: The CHP reports live ammunition inside the vehicle could be heard going off as the vehicle was fully engulfed in flames. PG&E has been called to the scene to repair the power lines. The company confirms that 2,128 customers are without power in the area from South Burson Road to Covey Lane. The estimated time of repair is 9:45am.

Original Post at 8:20am:  Valley Springs, CA — Emergency crews are on the scene of a solo vehicle crash on Highway 26 by the Olive Branch Drive intersection in the Valley Springs area.

The CHP reports a vehicle hit a power pole bringing lines down onto the roadway, then the vehicle burst into flames. An ambulance is heading to the scene, but injuries are unknown at this time. CHP officers are diverting traffic at Burson Road.