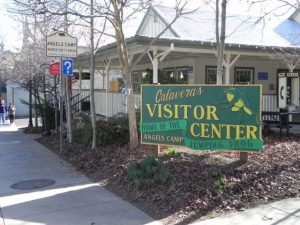 Before the Butte Fire, tourism in Calaveras County was at a healthy level, according to the Calaveras Visitors Bureau.

“It was a positive Summer,” said Boulton, “The Transient Occupancy Tax dollars were up and we saw a twenty percent increase in visitors at the Visitors Center in Angels Camp.”

During the Butte fire, visitors stayed away.

Since the Butte Fire, Boulton said that there has been an impact on tourism and that she has received a number of calls from people who live out-of-state, who were concerned because they had plans to come visit but were no longer sure of what the conditions are currently like.

“Once the smoke cleared, we had an influx of tourists with a number of people who simply wanted to tour the devastated areas.” said Boulton. “That’s not something we market or encourage as it can be dangerous around some of the affected roads and areas with stands of burned trees.”

Although the marketing effort is mostly always out of the county, the Butte Fire has caused the Visitors Bureau to become locally involved.

Boulton explains, “This holiday season we are teaming up with Toys for Tots and Santa’s Express to help brighten up the season for families that lost their homes to the Butte Fire. Toys for Tots is a program run by the US Marine Corps Reserve that collects toys during the fall months to distribute to less fortunate children in the communities where the program is conducted. Santa’s Express, a local program, conducted by The Resource Connection, takes those toys, sorts and distributes them. We are asking residents to bring new, unwrapped toys, books and stocking stuffers (appropriate for ages 0-16) to the Calaveras Visitors Center at 1192 South Main Street, Angels Camp, and put them in our big Toys for Tots box. We will be accepting donations until December 23rd.”

Additionally, Boulton is encouraging Calaveras residents to shop locally because of the impact that the Butte Fire had on local retail businesses.

On Wednesday November 4th, the 2015 Calaveras Visitors Bureau Annual Dinner & Innovations in Tourism Awards will take place at Outer Aisle Foods in Murphys at 5:30 PM. You can RSVP by emailing info@gocalaveras.com. The schedule for the evening includes a talk by Visit California’s Bryce McAnally, Interim Director of Consumer Marketing.

This takes place on the same night that PBS will air an episode of “Rob on the Road” which was filmed in Calaveras County.