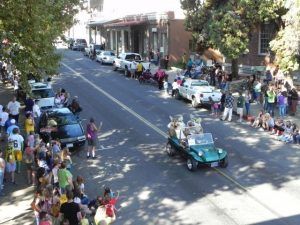 The parade is scheduled to begin on Washington Street just after 2:20 pm.

The Wildcats football team will play the Linden Lions at Dunlavey Field.

The Homecoming Queen will be crowned during halftime. There is no Homecoming King.

A Homecoming Dance, for students only, follows this evening’s football game.

Tickets will be available at the entrance gates tonight.

Tonight’s game will be broadcast on Star 92.7 FM, shortly after 7pm and streamed on mymotherlode.com. Star 92.7 is the radio home of the Wildcats.