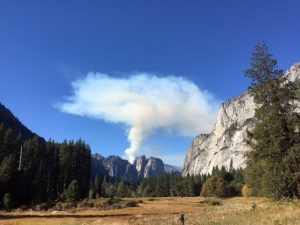 Yosemite, CA — The Bridalveil Fire burning in Yosemite National Park is estimated to be 30-40 acres, as of this morning.

Yosemite spokesperson Ashley Mayer says the fire is believed to be human caused, and that an investigation is underway. Two helicopters are assigned to the fire, which was first spotted on October 5, and crews are trying to actively suppress the blaze. Hotshot crews from the Stanislaus National Forest have also been assisting the effort.

The Pohono Trail is still closed from Dewey Point south to the trail junction from Taft Point and McGurk Meadow. There are no structures in immediate danger, but the fire has been visible from Yosemite Valley.

A special thanks to community news partner Linda George for sending in the photo. Pictures can be e-mailed to news@clarkebroadcasting.com.