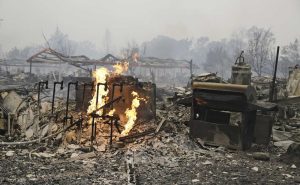 Of those destroyed, 1,280 were homes. The fire ignited on September 12th and burned 76,067 acres in Lake, Sonoma and Napa counties. Four civilians died in the fire, and four firefighters reported injuries. CAL Fire considers it the 3rd most destructive fire in the state’s recorded history. 248 firefighters are still on scene this morning, and three helicopters are still patrolling the fire for hot spots. Rehabilitation efforts are underway to restore the natural landscape that was altered during the firefighting efforts. The cause of the fire remains under investigation.