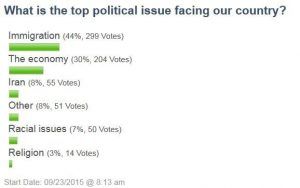 A recent myMotherLode poll question asked “What is the top political issue facing our country?” Immigration won out with 44 percent of the 673 votes over two and a half days. The other choices were the economy (30%), Iran (8%), Other (8%), Racial issues (7%), and Religion (3%) A follow up question was asked, “What is the top local issue?” with Drought winning out (57%) over Crime, Economy, and Traffic/roads.

A monthly Gallup poll asks a different question; “What do you think is the most important problem facing the country today?”As a formal poll Gallup uses a random sample of 1,025 adults, aged 18+, living in the U.S. The margin of sampling error is ±4 percentage points at the 95% confidence level.

The September Gallup poll results found that no one issue dominates Americans’ perceptions but dissatisfaction with Government, economy in general, and immigration were named by more than one in 10.

Gallop says “The relatively high percentage of Americans who nominate immigration as the top problem may reflect the emphasis it has received in Donald Trump’s presidential campaign. However, the current migrant crisis in Europe and the surge of young immigrants from South America in the summer of 2014 may have also influenced this uptick. But economic problems are still a major factor in Americans’ minds, with a net of 35% of Americans mentioning an economic issue. Since November 2013, the economy and dissatisfaction with the government have typically been among the top-ranking problems, at times joined by unemployment, immigration and healthcare.” September’s complete Gallop question responses and trends are here.