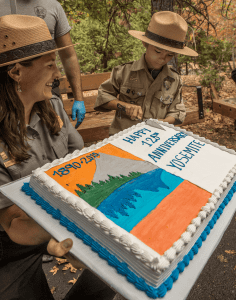 A ceremony was held Thursday at the Yosemite Valley Visitors Center. 400 of those on hand were area students. The event included a living history portrayal of John Muir, a Native American blessing, and songs.

10-year-old Gabriel Lavan-Ying of Flordia, who became an honorary park ranger back in 2014 via the Make-A-Wish Foundation, served as the Honorary Chairman of the event.

Yosemite officials report there were presentations of artwork from schools, anniversary cakes, and commemorative posters created for the special occasion. Delaware North, the parks concessioner, and Yosemite Conservancy, the park’s philanthropic partner, also presented checks to the local schools to support many programs.

Park Superintendent Don Neubacher stated, “It is wonderful to see all of the students here, who will be preserving and protecting Yosemite National Park for the next 125 years and beyond.”