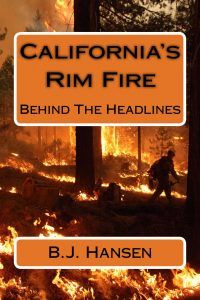 Sonora, CA – As the Mother Lode recovers from the disastrous and deadly Butte Fire, a behind-the-scenes book about the largest blaze ever to burn through the Sierra Nevada has been published.

Written by BJ Hansen, Clarke Broadcasting’s News Director, California’s Rim Fire: Behind the Headlines covers the third largest wildfire in the state’s history, its flames attacking both the Stanislaus National Forest and Yosemite National Park around this time just two years ago. According to Hansen, the book is intended as a comprehensive account, aimed at answering lingering questions; providing little-known details ranging from firefighting strategies to political moves; and sharing firsthand accounts from impacted residents and key officials.

More details on Hansen’s retrospective, and details on where the book can be purchased, are available online at rimfirebook.com. It is available at various local locations. Additionally, Inner Sanctum Cellars in Jamestown will host a signing with the author this Saturday from 5 to 7 p.m. A second signing, scheduled Thursday, Oct. 22 at 6 p.m. will take place at Skyline Place Assisted Living Center, in Sonora.