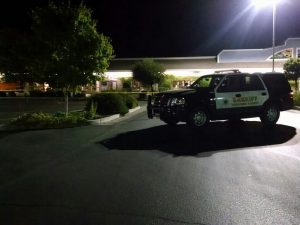 TCSD on scene of stabbing incident

Sonora, CA – One of two stabbing victims flagged down a Tuolumne County Sheriff’s Deputy for help following a brawl at an East Sonora shopping center.

Tuolumne County Sgt. Deborah Moss reports 31-year-old Christopher Weakley of Sonora, who was bleeding from his nose and an arm, stopped a deputy Sunday night near the Flyers Gas Station on Mono Way. Weakley told the deputy he and 20-year-old Brenden Ruhga had been involved in a knife fight in the Junction Shopping Center parking lot.

Weakley was subsequently taken by ambulance to Sonora Regional Medical Center. According to Moss, Ruhga was already being treated there for cuts to arm and armpit. While both had knives, no other weapons were found on the men or at the scene. Moss says the case is still under investigation and no further suspects are being sought.