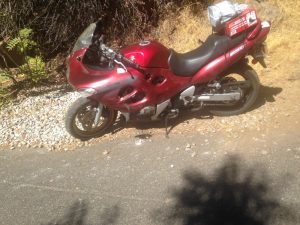 Update at 3:30pm:  A high-speed motorcycle chase reached speeds of up to 120 mph along Highway 108 in Tuolumne County, ending with a crash and arrest in Jamestown.

The pursuit started at 1:27 p.m. near the J-59/La Grange junction on Highway 108 heading towards Jamestown, after an officer tried to pull the bike over for speeding. The CHP reports that the motorcycle driver, 42-year-old Felimon Santos of Mountain House, which is near Tracy, refused to stop and took off east on the highway toward O’Byrnes Ferry Road. CHP Officer Nick Norton says, “The speeds were anywhere from…40 mph all the way up to approximately 120 mph. He passed a couple of vehicles on the shoulder. It was a very dangerous situation.”

Once in Jamestown, Santos turned onto Rawhide Road, heading north, and crashed near Peppermint Creek Road. Norton explains, “He was unable to negotiate the curve at the top there, which is like a 20 to 25 miles per hour curve, and laid down the motorcycle. At that point, he then got up and attempted to flee on foot.” Several officers chased down Santos and took him into custody.  Complaining of leg pain, Santos was taken by ambulance to Sonora Regional Medical Center where Norton says he will be tested for DUI.

Original Post at 1:45pm: Jamestown, CA — The CHP is following up in the aftermath of a high-speed chase in Tuolumne County that reached speeds of 120 mph.

The pursuit ended on Rawhide Road near Peppermint Creek Road, but there are few details, yet on how it is being resolved. The CHP reports an ambulance and tow truck are heading to the scene, but there are no further details regarding injuries or whether or not a crash took place.

The chase started at around 1:30 p.m. when a patrol car spotted a motorcycle speeding along Highway 108 near the O’Byrnes Ferry intersection towards Jamestown. The officer followed in pursuit of the bike. The motorcycle driver headed north onto Rawhide Road as another two patrol cars joined in the chase, according to the CHP.

Officers are currently using one-way traffic control on Rawhide Road, so motorists should slow down and use caution or chose an alternate route.