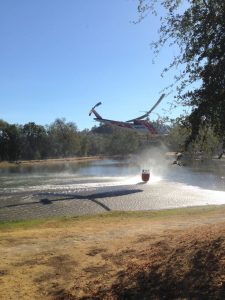 Sonora, CA — What led to the death of a 71-year-old Sonora man is being actively investigated by law enforcement.

As first reported yesterday, a fire along Red Heather Drive near Spanish Grant Drive burned three acres in the Crystal Falls area. Emergency officials found a burned 2008 Jeep, and a body, within the fire perimeter. The deceased was an unidentified 71-year-old man from Sonora.

Explaining what occurred, CHP Officer Nick Norton says, “There was a vehicle in a driveway on Red Heather Drive, that for unknown reasons, rolled backwards down the steep driveway. It went across the road and down a steep embankment. The vehicle did collide with several rocks, and the rear of the vehicle  then struck a tree and came to a stop. The vegetation around the vehicle did catch on fire, and we are assuming that it was the cause of the fire yesterday.”

The incident happened at around 3:30pm on Tuesday.