Interceptions Rule For The Wildcats 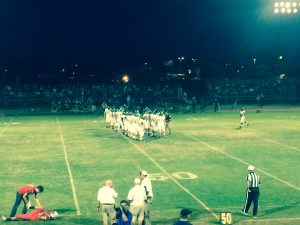 Wildcats defeat the Inidians at Rippon

There were some close and high scoring games in week four of the high school football season.

The Wildcats played spoiler to Ripon High’s Homecoming as Sonora picks up the win. The Wildcats played well on both sides of the ball with four different players getting interceptions. Bradley Canepa had 3 touchdowns and an interception in the first half and finished the night with 4 total scores. Wyatt Faughnan and Jacob Doeler each stole the ball, and added interceptions to their stats. It looked a little bit like a double take as Kane Rodgers, for a second game in a row, picked off the pigskin in the second quarter. Sonora defeats Ripon 36-20

Elsewhere on the gridiron, Summerville took to the road and lost to Hughson 27 to 13. With concerns of poor air quality due to the Butte Fire alleviated, Calaveras took to its home field and beat Union Mine in a close match 28-21 and Bret Harte rolled over Western Sierra 62- 0.

*Mark Ferreira contributed to this report