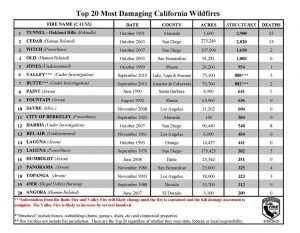 Update 9-20-15: The Butte Fire is the 7th most destructive with 882 buildings destroyed so far. The Valley Fire is 6th so far with 888 buildings destroyed. Structures include homes, outbuildings (barns, garages, sheds etc) and commercial properties.

Original Story 9-17-15: Calaveras, CA — Sonora and the Mother Lode are no strangers to fire and once again a local fire has made a top 20 list.

The Butte fire has earned a dubious spot as the 14th most damaging fire so far among California fires. CAL Fire has been keeping close track of fire stats for the past 80 years and the Butte Fire already ranks among the most damaging. CAL Fire assessment teams report 408 structures damaged by the fire CAL Fire notes the number will likely change.

The Valley Fire in the Lake County area ranks 9th most damaging with 608 damaged structures. Structures include homes, outbuildings (barns, garages, sheds etc) and commercial properties. CAL Fire says number of structures damaged by the Valley Fire is “likely to increase by several hundred.” It could move up to 6th place if the damaged buildings exceed 641. The 5th most damaging fire, the Jones Fire in Shasta destroyed 954 structures.

In other stats the Rough Fire at 139,133 acres is the 16th largest fire since 1932. The Rough fire, burning since July 2015, was started by lightning. It is currently considered 5,000 acres bigger than the 17th largest fire, last year’s Happy Camp Complex fire (also lightning caused) in Siskiyou county. The rank for Fresno County’s Rough Fire will likely change and will not be known until the fire is contained. The perimeter of the Rough Fire is 67% contained.

The Rim Fire, which was human caused, remains the third largest fire at 257,314 acres. One-hundred and twelve structures were damaged by the Rim Fire.

The California ranks are reported regardless of whether they were state, federal, or local responsibility.