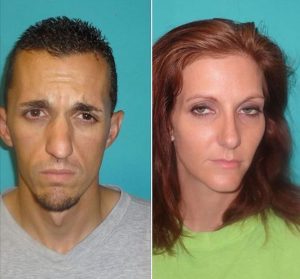 At 1:41 pm Sonora Police Department received information from a Modesto car dealership that an Nissan had been stolen; driven through a chain link fence at the dealership while still displaying the dealership’s paper license plates.

At about 2:45 pm, a Sonora Police Department community service officer who was patrolling The Crossroads shopping center located the stolen vehicle, which was parked in front of Big 5 Sporting Goods, and requested officers to respond.

Officers found the two subjects inside of Big 5 Sporting Goods, reporting that the two exited but did not stop at the stolen vehicle when they noticed officers there. Once confronted,  Andrew Ball, 29, and Breeann Perry, 34, both of Modesto, first gave false identifying information. Both subjects were taken into custody without incident.