Playtime Is New And Improved In Twain Harte 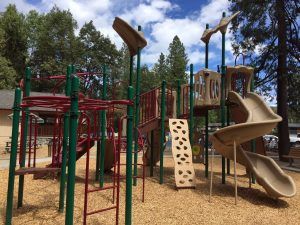 Twain Harte, CA — The recently completed play structure at Twain Harte’s Eproson Park is already ringing the bell at the top of the fun factor scale.

Featuring forest green and earthy neutral tones with dark red accents, the modern but whimsical design gives off the appearance of almost having sprouted up in place, offering numerous slides as well as engaging interfaces for climbing and swinging. Says Trott, “We, and the children — who have been thoroughly enjoying the play structure — are very appreciative of this wonderful community who makes things like this possible in Twain Harte.”