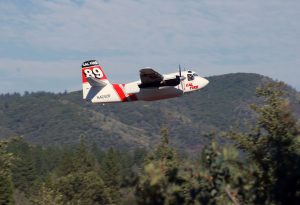 Update 6:30 p.m.: Cal Fire reports the forward rate of spread has been stopped. Several spot fires were sparked in the grass around Swiss Ranch Road, but ground crews were able to put the flames out quickly, according to dispatch.  Crews will remain on the scene mopping up into the night.

Update 5:45 p.m.: Cal Fire dispatch reports a tanker has been released from the four to five acre fire on the 6300 block of Swiss Ranch Road, but had no other details regarding any containment on the fire.

Update 5:30 p.m.: Cal Fire confirms the injured person is being treated for burns.

Update 5:10 p.m.: Cal Fire confirms a person is being treated for unknown injuries and that several other homes and a barn across Weather Top Road are also being threatened by the flames.

Original Story 4:56 p.m.: Mountain Ranch, CA — Firefighters and Columbia aircraft are heading to a one to two acre grass and oak woodland fire in Calaveras County. Cal Fire reports the flames have a moderate rate of spread. An out building is also reported on fire. The fire broke out at 4:45pm on the 6300 block of Swiss Ranch Road near Weather Top Road in Mountain Ranch.

There are reports that a person has been injured with burns on their hands and arms due to an exploding gas tank.