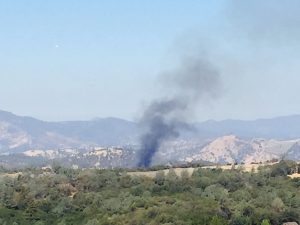 Tuolumne County, CA — Negligent use of equipment is what Cal Fire investigators determined as the cause of a vegetation fire that spread to a Tuolumne County barn.

As previously reported, flames broke out in some grass in the 9000 block of Fraguero Road around 10:15 a.m. Monday and subsequently set an adjacent barn ablaze. Cal Fire Battalion Chief of Fire Prevention Matthew Gilbert notes, “The cause of the fire was determined to be the use of a lawnmower in dry vegetation. The fire ultimately was contained at .09-acres. There is no suspicion of arson and I would classify it more as negligence as opposed to an accident.”

The barn was a total loss and the person who was riding the lawnmower could face misdemeanor charges for starting the fire, which typically carries a fine, according to Gilbert.  A 70-year-old resident at the property suffered burns and was taken by ambulance to Sonora Regional Medical Center. As for the victim’s burns, Gilbert indicated he did not know the placement or extent of the injuries, nor his current condition.