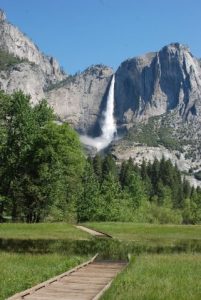 Two fires in Mariposa County that began on August 10th are under patrol status, according to park fire officials. One of those, the 3.85 acre Upper Fire, was determined to be human caused but exactly how it was ignited is still being investigated. Park officials credit nearby hikers for alerting them to the blaze.  Additionally, crews quickly suppressed the 0.01-acre Badger fire in the Summit Meadows area near Glacier Point Road, which a helicopter discovered on a fly over of the area.

Park officials warn visitors that the numerous blazes throughout California are affecting air quality. Smoke may also be visible in the skies due to these smoldering fires. Below is Yosemite’s list of lightning strike fires under current monitoring:

Cathedral (8/2): This is near the John Muir Trail to Cathedral Lakes. The perimeter is actively smoldering and creeping through lodgepole pine needles and logs and has good potential to grow until it hits natural barriers. The fire is 16 acres in size and is being monitored.

Middle (7/27): It is west of White Wolf and south of the Middle Tuolumne River. It is at 14.1 acres, and smoke may be visible from Tioga Road. It continues to smolder and creep through down logs, pine needles and other vegetation. It is in a red fir and lodgepole pine forest.

White Cascade (7/3): This remote fire is east of Glen Aulin High Sierra camp, east of Conness Creek, and west of Tuolumne Meadows, and is at 8 acres. This high elevation fire, in a lodge pole pine forest, has a low spread potential. The fire is not near any trails. Smoke may be visible in Tuolumne Meadows.

Stubblefield (8/3): This fire is in Stubblefield Canyon and west of the Pacific Crest Trail and at the northeast section of the Park; it is very remote. It is most likely a lightning strike holdover. Currently, it is 2 acres in size, in a red fir and Jeffrey Pine forested area, with other sparse vegetation.

Dark (7/ 9): This fire is along the Yosemite Creek Campground Road and smoke is periodically visible from both the campground and Tioga roads. Fire crews secured the